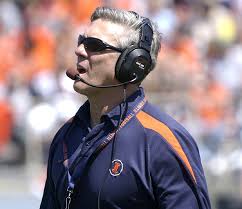 Illini fans cursing the television Saturday, while Illinois shuffled to another lethargic loss at Purdue, saw a familiar theme of the last decade or so.  It was the inexplicable letdown, the inconsistency, the ability to lose when you should win.  No one would blame said fans for typing a quick email to new Athletic Director, Mike Thomas:  This is why you can’t get a sellout.  This is what you’re up against.  Do something about it.

We’re not going to recount and analyze the game versus Purdue, because it was depressingly similar to the OSU game.  Lack of urgency, defense off-balance, poor scheme and play-calling by the offense (Note to Petrino:  there’s this play called a screen pass – use it), and horrible special teams.  And about those special teams – coming into this game, the Illini were 119th of 120 teams in kickoff returns, 112th in punt returns and 107th in net punting.  Who personally coaches the special teams?  You guessed it, Ron Zook.

Purdue is an OK team that might make a bowl.  Illinois looked confused and sloppy against them.  Next up is Penn State, an OK team with an extremely soft schedule (like the Illini), but they’re now 7-1.  Last year the Orange and Blue went to Happy Valley and dominated that game – the first road victory against the Nittany Lions.  It’s tough to see that happening this time around.  Here are a couple of keys:

After this, the Illini have a bye week, then home games against Michigan and Wisconsin before closing on the road at Minnesota.  It could get ugly.  And here’s what your Guenther-weary long sufferers will say:  end the season 2-2 to bring the record to 8-4 or start looking for a new coach.  That sound about right to me.