The fail of college football having provided us with an intra-conference rematch for the so-called BCS National Championship, it’s time again to dust off the ol’ playoff scenario.  Yes, it’s the Beemsville Bowl Playoff Championship (BPC; TM pending).  Our playoff system is a 16 team affair, with the semi-final and final at neutral bowl sites.   Here’s the setup…

Have a look at this year’s match-ups (click on the image to view larger): 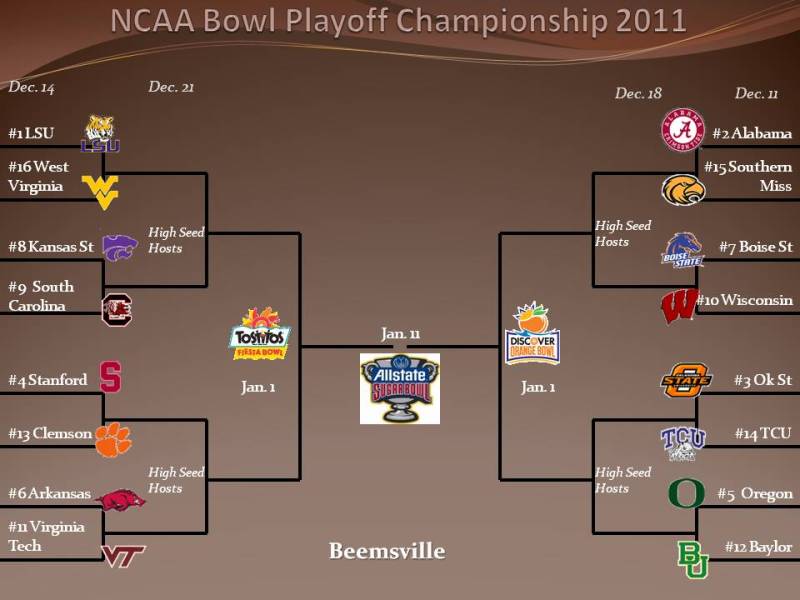 Some clear winners and losers here and a lot of interesting match-ups.  Think about the sponsorship money this might demand…  Would an equitable split of all that money acquired by the NCAA for this playoff help other schools with their non-revenue sports?  You bet…
#Winning:  Everyone’s favorite (overrated) conference, the SEC, get’s four entries in this years sweepstakes, followed by the Big 12 with three teams.  The Mountain West feels spiffy getting their champs and an at-large team in the mix.  Southern Miss and Conference USA are in.  These two non BCS conferences will find it tougher to crack the party as re-alignment madness continues, and our formula for inviting two non-BCS champions would no-doubt be looked at in coming years.  West Virginia (BCS #23) gets the golden turkey as the lowest ranked team, only there by virtue of their Big East crown.  They’re happy to be here.
#Losing: The Big 10 is furious with this arrangement, with lonely Wisconsin as the single entrant.  Not only that, Bucky has to go play on the smurf-turf in the first round, and if they survive that it’s a likely trip to Alabama.  This is what the Big 10 gets for it’s carefully weighted Leaders/Legends division and a conference championship game that knocked Michigan State out of the running.  Any other year and the Big 10 gets two teams in.  Michigan and Oklahoma are also mad as the last two teams out based on rankings.  They’re particularly cranky to be passed by Big East, Mountain West, and Conference USA entrants.  The Rose Bowl is out of the rotation this year, so while they’re not happy, they’d be OK with hosting the Wolverines and Sooners in the clash of the non-qualifiers.
SO… chime in with your thoughts on this four team tourney?  What match-ups do you like.  Who would come out on top?  Think we would still get that all-SEC championship?
This is probably the last year for the current Beemsville formula.  We might have to switch it up to account for all the conference jumping going on next year.