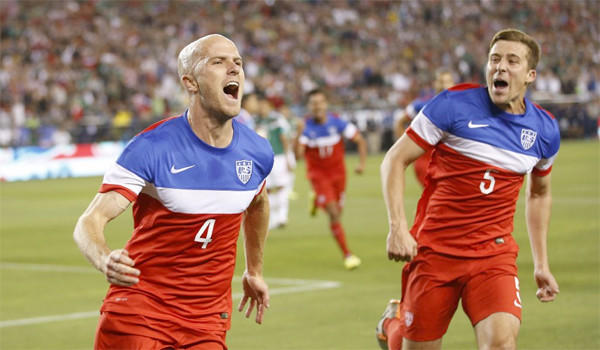 The General celebrates new shirts and a goal

Say this for the new away kit:  It looked a lot better in action than it does on the promo material…  And along with the new bomb-pop shirt, Jurgen trotted out a diamond midfield – something the EA Sports FIFA Soccer series tells us is always a good idea (offensively, at least).  Recently heralded German-American, Julian Green – all of 18 years old – debuted and showed some flashes.  And as good as the American midfield looked in the first half, the Mexicans adjusted and controlled the first portion of the second half.

So even though a brutally bad offisides call robbed Eddie Johnson of a clinical goal in the final ten minutes of the game, which would have given the U.S. the win, we’ll take a 2-2 tie.  We’ll also take note of who’s ready and who’s not, because the naming of the World Cup preliminary roster is only a month away.

Five points in this USA-Mexico pentagram from Arizona…