Power of the Cup

“Who would win?” my son asked me.  “Michael Bradley and Graham Zusi vs. Clint Dempsey and Landon Donovan.  It’s two-on-two.”

“No goalkeepers?” I replied.

“Zusi and Bradley get Tim Howard.  The other guys get Brad Guzan.  Three-on-three.”

“Well, you keep saying he should be there with the team…”

That’s my boy!   For the record, I took Dempsey, Donovan, and Guzan.

This discussion took place out of the blue last week.  Before the World Cup, my eight-year-old son barely knew the U.S. Soccer team.  He knew a few of them, but now he knows the entire roster.  He’s interested, engaged.  He and his sister sat and watched nearly all of each group stage match – two of them out at sports bars/restaurants, one in town.  He can’t get enough World Cup.

He’s not alone.  The USA-Portugal match last Sunday drew a lot of eyeballs.  In fact it was ESPN’s highest ever rating for a non-football broadcast.  Higher than any college basketball game, NHL game, car race, and yes, Major League baseball game (World Series or otherwise).

Will Ferrell’s in Recife.  Tim Lincecum threw a no-hitter and immediately donned his bomb-pop jersey: 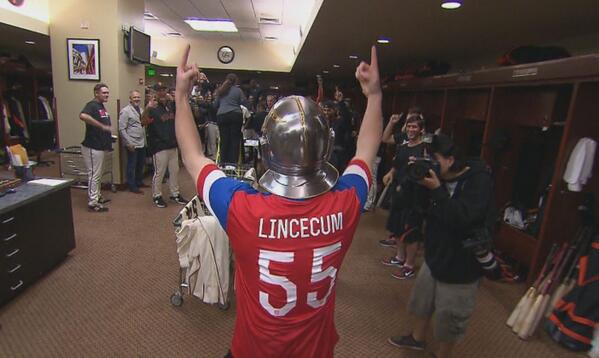 You’ve no doubt seen the coverage of Grant Park in Chicago, Central Park in New York, Kansas City, and all the folks there to watch and celebrate.  We were at the local Buffalo Wild Wings last Sunday and the place was filled with fans.  It was raucous, loud, nervous, and joyful (until the end).  Can’t imagine a more energetic, pumped up crowd at the Springfield, IL BW3 for anything else short of an Illini Final Four game, or maybe a Cubs World Series appearance (Cardinals fans are spoiled by success).

So now Team America moves on to the Knock-Out rounds with Belgium our next opponent on Tuesday.  More people will tune in.  Win that one and we’ve equaled our best ever appearance – a possible showdown with Messi and Argentina.

Yes, for many, soccer will fade into the periphery once the World Cup is over, but more and more people will give soccer a try.  This is how I became a fan years ago.  They’ll tune in to MLS and the EPL and the Champions League.  Some of those kids will decide to stick with futball instead of football.

All part of the progression – the draw and power of the World Cup.