University of Illinois alums and fans were pretty sure Mike Thomas would be gone once the football report was released.  Many of us were surprised that the University decided to to it so quickly.  Opinions vary on the why and what:  the venerable one opines that 1) Beckman and Groce haven’t won enough, 2) Important alums are mad about the State Farm Center re-seating process, and 3) the medical issues with Beckman were a big problem.  Robert at Illiniboard goes to the medical issue, as does veteran scribe Mark Tupper.  Listening to the fellas on the Tay and Jay Show yesterday, they had much the same response.

If you look at the report, it certainly paints Beckman as a bumbler and a boob at best, and a bit of a bully when it came to injuries.  Some of us had thought in those terms on the former points; as far as the injuries – there are a lot of coaches out there who will be looking at the report closely and updating their policies as a result.  It seems like Thomas did what he could once he had awareness of the issue, but in Illinois (land of lawsuits), you have to watch your back with the whole culpable deniability.  I thought Thomas was making progress on many fronts, but when you’re football coach hire turns south and your basketball coach hire is treading water, it’s time to polish up the resume.  Thomas will still be making a lot of money out of this situation, and the real question is what next?

As the Internets told us this week, I is for Interim.  We are now without a permanent chancellor, AD, and head football coach.  The President is new.  Leadership at U of I needs to step in some capacity.  Could we get lucky?  Could we show some courage?  Could we make some hires who can make a difference and set us on a different, better path?  With the state of the state’s finances and political realities, such hires are more difficult than ever.  I’m hoping for sheer luck this time around. 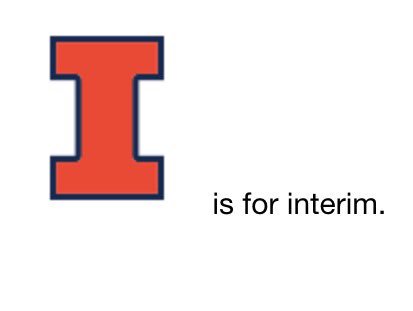